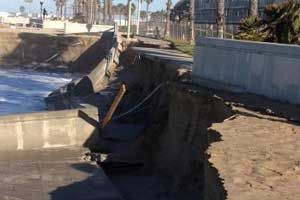 Emergency work began Tuesday April 29th, to save the beach area in the City of Port Hueneme from erosion, officials said.

High tide caused a large section of the seawall and part of the sidewalk on the beach side of Surfside Drive to collapse. City officials closed the pier and Lighthouse Promenade Walk in response.

Lawmakers and the Governor approved $2 million in state funding for emergency shore protection, but the city was delayed from immediate action because it needed approval from the California Coastal Commission for permits to access the money.

City officials submitted plans to place a rock to protect the shore, a method previously used by Army Corp of Engineers. The Coastal Commission asked city officials for other alternatives, including digging up sand from the Alaska Memorial and trucking it to the affected beach.

The commission settled on placing a rock and issued the permit on Monday April 28th, allowing the work to proceed.